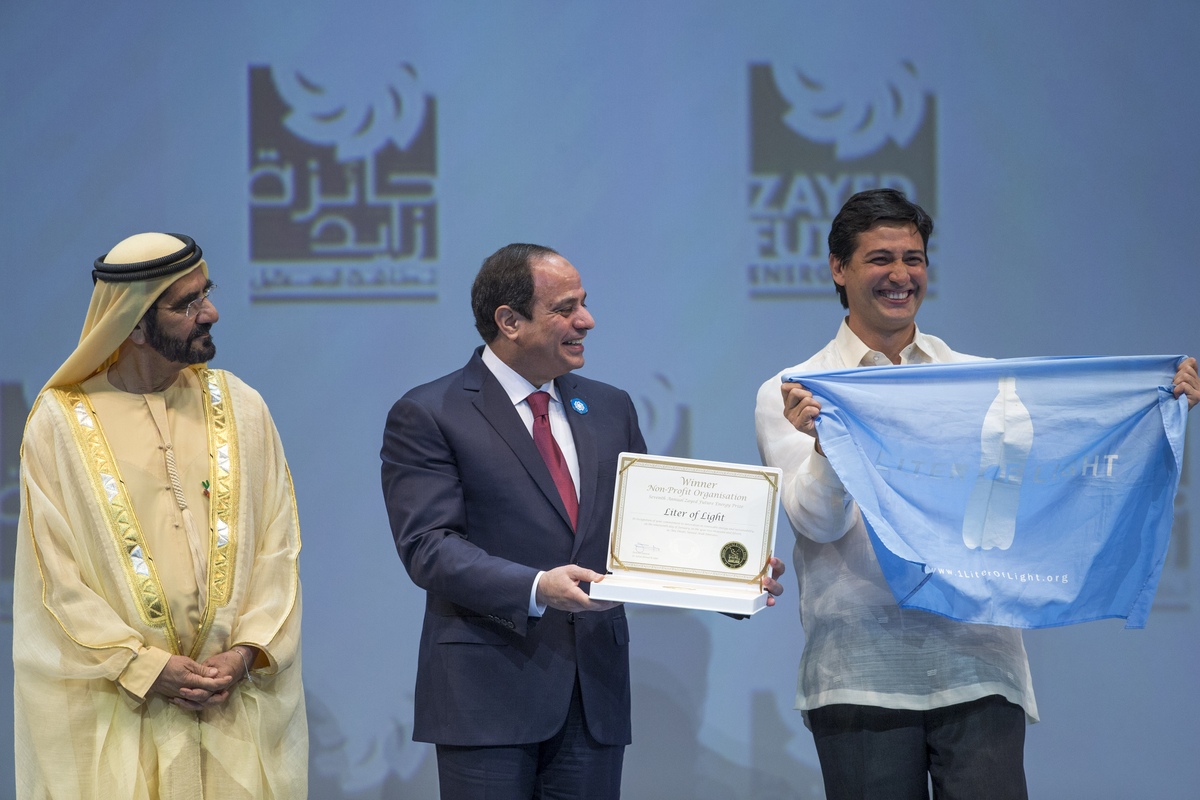 Litre of Light, a project in partnership with PepsiCo that brings cost effective solar lighting solutions to communities in need while recycling plastic bottles, has been honoured as the winning entry in the Zayed Future Energy Prize Non-Profit Organization category.

The award was presented to Illac Diaz, Liter of Light Founder and Executive Director of My Shelter Foundation, during the opening ceremony of the Abu Dhabi Sustainability Week and the World Future Energy Summit, held under the patronage of His Highness Sheikh Mohammed Bin Zayed Al Nahyan, Crown Prince of Abu Dhabi and Deputy Supreme Commander of the UAE Armed Forces.

Illac Diaz launched the Liter of Light as a social enterprise in the Philippines in 2011, under the MyShelter Foundation.

“The purest form of charity is to make yourself obsolete and through this people’s technology, supported by PepsiCo, it shows that empowering the bottom of the pyramid, by putting the power of solar in human hands and multiplying it by hundreds of thousands could be the greatest energy solution of all,” said Illac Diaz.

“We are very proud to be associated with the Liter of Light project and we believe that the work that Illac Diaz is doing provides a sustainable solution that can light up the world in a cost effective and energy efficient way. The Liter of Light is already lighting up villages in the Philippines, Pakistan, Mexico and Columbia, and we are excited to now roll it out in the Middle East & Africa as well, in Egypt and Ethiopia. We look forward to working closely with Illac to expand to more countries in the future," said Sanjeev Chadha, CEO of PepsiCo Asia, Middle East & Africa.

Liter of Light is a global open source movement, which aims to provide ecologically-sustainable lighting solutions, free of cost, to simple dwellings around the world. It uses a simple device to do so – a transparent 1.5-2l plastic bottle, such as those used by Pepsi. The bottle is filled with water, and bleach to inhibit algal growth, and is then fitted through the roof of a home to provide as much light, during the day, as a 40- to 60-watt lightbulb, with zero carbon emissions.

The Zayed Future Energy Prize Non-Profit Organisation category honours non-profit organisations that have made a clear technical, organisational or social impact in the world of renewable energy or sustainability, particularly those involved with issues of energy access and human impact.