Star in Your Own Show with Snapchat’s Bitmoji TV

Snapchat declared the launch of Bitmoji TV, a brand-new, fully animated show starring Snapchatters and their friends. The show is a new form of customized leisure that places users and their friends in a TV show from a particular genre and provides a special experience for each viewer.

The first season of Bitmoji TV is set to premiere on Saturday, February 1st and will include 10 episodes averaging three minutes in length. New episodes will air weekly on Saturday mornings on Discover to Snapchatters globally.

Bitmoji TV is a funny, relatable, and wacky experience that satirizes television via Bitmoji’s comic-driven experience of humor. The show will feature comedy stars Andy Richter, Jon Lovitz, and Riki Landhome whose voices can be heard in episodes all through the first season.

The announcement of Bitmoji TV follows the success of Bitmoji Stories, a personalized comic strip starring Snapchatters and their friends’ Bitmojis. Launched in November 2018, Bitmoji Stories releases new episodes three times a week on the Discover page. In its first month, Bitmoji tales have been viewed by over 40 million special viewers. Since their debut, more than 100 million Snapchatters have watched Bitmoji Stories.

Snapchatters can watch Bitmoji TV only on Snapchat’s strong and quite engaging Discover page, where they can also subscribe to the show and receive notifications for new episodes. 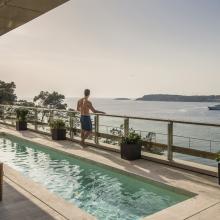