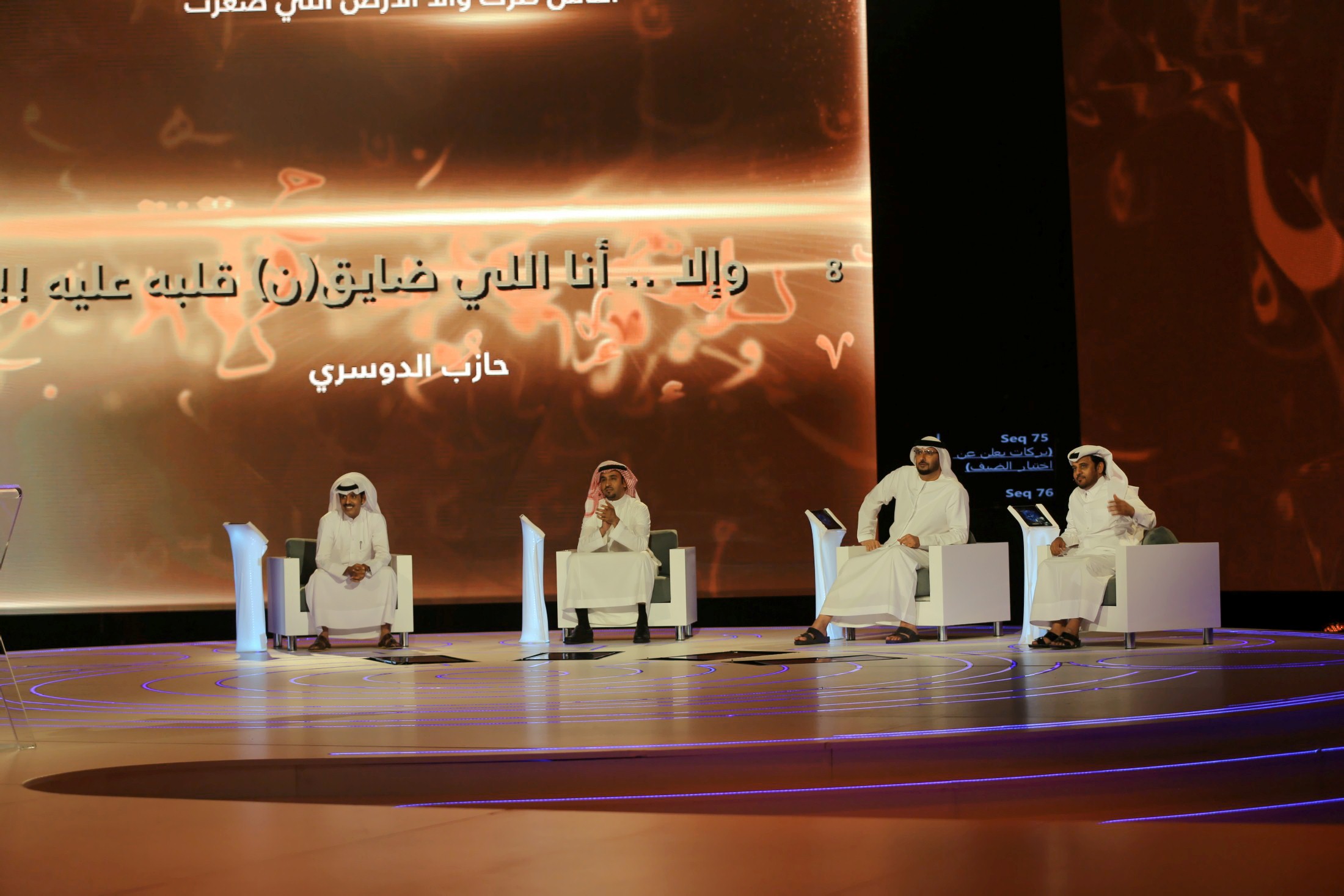 The first episode of the second season of ‘El Beit’ poetry show was aired at 9PM on Monday, November 10th. It was organized and produced by Hamdan bin Mohammed Heritage Centre. Filming took place at the show’s studio in Dubai Studio City.

The show’s second season was launched in line with the strategic vision of His Highness Sheikh Hamdan bin Mohammed bin Rashid Al Maktoum, Crown Prince of Dubai, to use El Beit as an interactive platform for promoting Nabati poetry as an essential cultural symbol of the UAE in particular, and the Gulf region and the Arab world in general. This is a key factor in building bridges between the past and the present, while strengthening the concept of national identity and serving as a tributary to preserve cultural heritage.

Abdullah Hamdan Bin Dalmouk, CEO of Hamdan Bin Mohammed Heritage Centre said: “El Beit show is considered as the hub and pathway towards creativity and talented poets. We are pleased to launch the second season of the show, in which we aim to elevate Nabati poetry and endow the poetic genre with a new understanding. We will use the latest technologies to revive our heritage. We thank His Highness the Crown Prince of Dubai, for his unlimited and innovative idea of this initiative.”

Mr Majid Abdul Rahman Al Bastaki, General Coordinator of El Beit show explained: "We are delighted to launch the second season of El Beit show with both new and existing elements. In addition, joining our judging panel this season is the phenomenal Omani poet Hamad Al Kharusi, who is considered one of the most iconic poets in the region. We hope to reach a broader audience, attracting a high response from our viewers and greater interaction with the participants. We hope to shed light on talented young poets so that our viewers can enjoy this show. I hereby congratulate the winners of the first and second episodes, and we look forward to showcasing new talents on the show‫."‬‬‬‬‬
After a warm welcome in the first episode of the second season by the show’s host Barakat Al Wagayan, the competition revealed an initial chater (first half of a poetic verse) on the show’s official website at 5PM on Monday, November 10th, which began: ‘Has mankind multiplied, or has our planet become smaller?’ This was the official kick-off of the show, energizing the audience of poetry and literature enthusiasts. In each episode, the audience must send the

second verse until 7PM, through tweets on (@el_beit). These tweets are evaluated by a screening committee for quality control, before being sent to the jury without any knowledge of the participant's name.

There are three rounds in which the jury selects four or more deserving chater (verses) per round, to be displayed on the ‘silver screen’. Should there be more than four deserving verses, the jury must review them and shortlist them to the best four. After the end of the third round, the 12 best verses will be shown on the ‘golden screen’ before selecting the best overall verse.

The first episode began by introducing the judging panels, then revealing the featured image and verse which began: ‘Has mankind multiplied, or has our planet become smaller?’ The first winner of the 100,000 AED was Saleh Al Sahli, who composed the following verse in response: ‘Or have faces become too many these days?’ His eloquence and ability to understand deeper meanings qualified him into the Grand Finale episode where he stands to win AED 1,000,000.

The last competition featured an image that was personally captured by the lens of HH Sheikh Hamdan bin Mohammed bin Rashid Al Maktoum, Crown Prince of Dubai. Viewers will write a verse that sums up the concept of the image and send it to El Beit’s official Twitter account, where the competition will be open until mid-day on Friday. The winner will get AED 100,000 while two runners-up will each get AED 50,000. However only the first-placed participant qualifies for the Grand Finale episode.

Among the most prominent additions this season is a guest of honour who will be hosted in each episode. These guests will be pioneers and highly renowned masters in literature and poetry, who will be entrusted with selecting a winner should the judges face deadlocks in the votes. One of the two competing verses and the verse displayed on the golden screen will stand to win their composer AED 100,000, although he or she is not eligible to participate for the Grand Finale episode.

The show is hosted by Barakat Al Wagyan and the co-host for the second season is Emirati poet Ahmed Al Bidwawi, who introduced the great poet Nayef Saqar - considered one of the pioneers of contemporary poetry - as a special guest of honour in the first episode. Nayef selected the following verse by competitor Hazem Al Dosari: ‘O, I am the one whose heart is torn for him’. He won AED 100,000, although he is now ineligible to participate in the Grand Finale episode.

In this celebration of poetry, the guest of honour Nayef Saqer commented: "I would like to express my heartfelt appreciation to everyone in this show for their generosity and support. Hamdan Bin Mohammed Heritage Centre is a vital supporter of creativity and poetry, with the support of His Highness Sheikh Hamdan Bin Mohammed Al Maktoum, Crown Prince of Dubai. This is not the first time we have seen such remarkable support, as the Centre is well-known for its ambitious initiatives that aim to revive poetry, and we look forward to seeing more initiatives in the field of poetry.”
The co-host for the second season is Emirati poet Ahmed Al Bidwawi, who said: "I am delighted to be with the team this year. I watched and participated in the first season, as I was its biggest fan. I wasn’t able to appear on the golden screen last year, but this season I was fortunate enough to work on this unique show and be at the heart of some of the best Nabati poetry”.