Starwood Hotels & Resorts Worldwide, Inc. (NYSE: HOT) today announced from the Sheraton Hotels General Manager Summit in Seattle that its largest and most global brand is poised for record-breaking growth over the next 12 months with 35 new hotels expected to open. Nearly half of the new Sheraton hotels will open in China, widening Starwood’s lead as the largest upper-upscale global hotel operator in Asia Pacific. Enhancing its reputation as a global powerhouse, Sheraton will also enter numerous new markets including Samoa, Tajikistan and Kazakhstan, and return to Iraq.

“Sheraton continues to grow at a phenomenal pace by leveraging its first-mover advantage in markets across the globe,” said Hoyt Harper, Global Brand Leader for Sheraton Hotels & Resorts. “Asia Pacific continues to drive the brand’s future pipeline growth, but we are also experiencing strong demand in other emerging markets including Eastern Europe and the Middle East. In addition, the resounding success of our brand-wide revitalization and multi-billion dollar investment to enhance the brand over the past several years has led to a growing number of conversion opportunities in more mature markets.”

Demand for Sheraton Surges across Asia Pacific
After topping 100 hotels in Asia Pacific in 2013, Sheraton continues to build momentum in the region with 23 openings expected over the next 12 months. Sheraton will open approximately one hotel every three weeks in China alone, reflecting the brand’s aggressive growth primarily in the country’s secondary and tertiary markets. The brand will launch in Wuhan, Shaoxing, Nanchang, Zhengzhou, and Qingdao, while adding its third hotel in Beijing and fifth in Shanghai. More than 13 additional Sheraton hotels are slated to open in China by 2017.

Sheraton is also gaining momentum in India, where it will add three additional hotels to its portfolio over the course of this year and 2015, with openings slated for Bengaluru, Noida and Chandigarh. In addition, the global powerhouse will enter several other new markets in Asia Pacific in the next 12 months including New Caledonia, Samoa and Sri Lanka.

In the Middle East, Sheraton will open seven new hotels, increasing its portfolio to 23 hotels by February 2015. Highlights include the Sheraton brand’s debut in both Kazakhstan and Tajikistan, and its return to Iraq with the opening of Sheraton Dohuk Hotel in 2014, followed by Sheraton Erbil Hotel in early 2015. Other openings include the brand’s fourth hotel in Saudi Arabia (Sheraton Medina Hotel) and fifth in Dubai – the 660-room Sheraton Dubai Tower Sheikh Zayed Road Hotel.

In Africa, Sheraton continues to strengthen Starwood’s position as a leading global hotel operator with new hotels slated to open in Mauritania, Guinea and South Sudan by 2017. These recent signings increase the Sheraton pipeline in Africa to six new hotels.

“Sheraton is truly a global pioneer with a long legacy of reaching new markets first and building meaningful relationships with owners and developers,” said Simon Turner, President of Global Development for Starwood. “The result is that Sheraton is leading Starwood’s global pipeline growth and creating opportunities for the further development of all our brands in diverse markets worldwide.”

Starwood Gains Momentum in the Americas
Within Latin America, Brazil is one of Starwood’s most promising growth markets as the country accelerates infrastructure development ahead of the 2014 FIFA World Cup and 2016 Summer Olympics. This year, Sheraton will open its seventh hotel in Brazil --- Sheraton Reserva do Paiva Hotel and Convention Center, following last year’s opening of Sheraton da Bahia Hotel in Salvador, Brazil. Next month, Sheraton will mark its return to the Dominican Republic with the opening of Sheraton Santo Domingo Hotel, ideally located on Avenida George Washington, the city’s luxurious waterfront avenue lined with palm trees and casinos.

About Sheraton Hotels & Resorts
Sheraton helps guests make connections at more than 400 hotels in nearly 70 countries around the world and recently completed a $6 billion global revitalization and is now in the midst of an $8 billion global expansion over the next three years. Sheraton is owned by and is the largest and most global brand of Starwood Hotels & Resorts Worldwide, Inc., one of the leading hotel and leisure companies in the world with nearly 1,200 properties in 100 countries and 181,400 employees at its owned and managed properties. Starwood is a fully integrated owner, operator and franchisor of hotels, resorts and residences with the following internationally renowned brands: St. Regis®, The Luxury Collection®, W®, Westin®, Le Méridien®, Sheraton®, Four Points® by Sheraton, Aloft®, and Element®. The Company boasts one of the industry’s leading loyalty programs, Starwood Preferred Guest (SPG), allowing members to earn and redeem points for room stays, room upgrades and flights, with no blackout dates. Starwood also owns Starwood Vacation Ownership, Inc., a premier provider of world-class vacation experiences through villa-style resorts and privileged access to Starwood brands. For more information, please visit www.starwoodhotels.com. 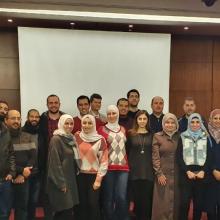 RIPE NCC and Jordan regulator partner up to increase